Our conversations with you tell us that you like to have a 20-minute power nap as you notice a massive positive impact on your productivity, energy levels and mood. Yet many of you only do this on days you work from home. Our mission at ProNappers will not be complete until you all feel equally happy and able to power up and nap on the days you are in the office.

We took a snapshot survey to collect your views and experiences of napping in the workplace. Thank you for your input to help make napping acceptable and accessible for all.  You can read the results below. 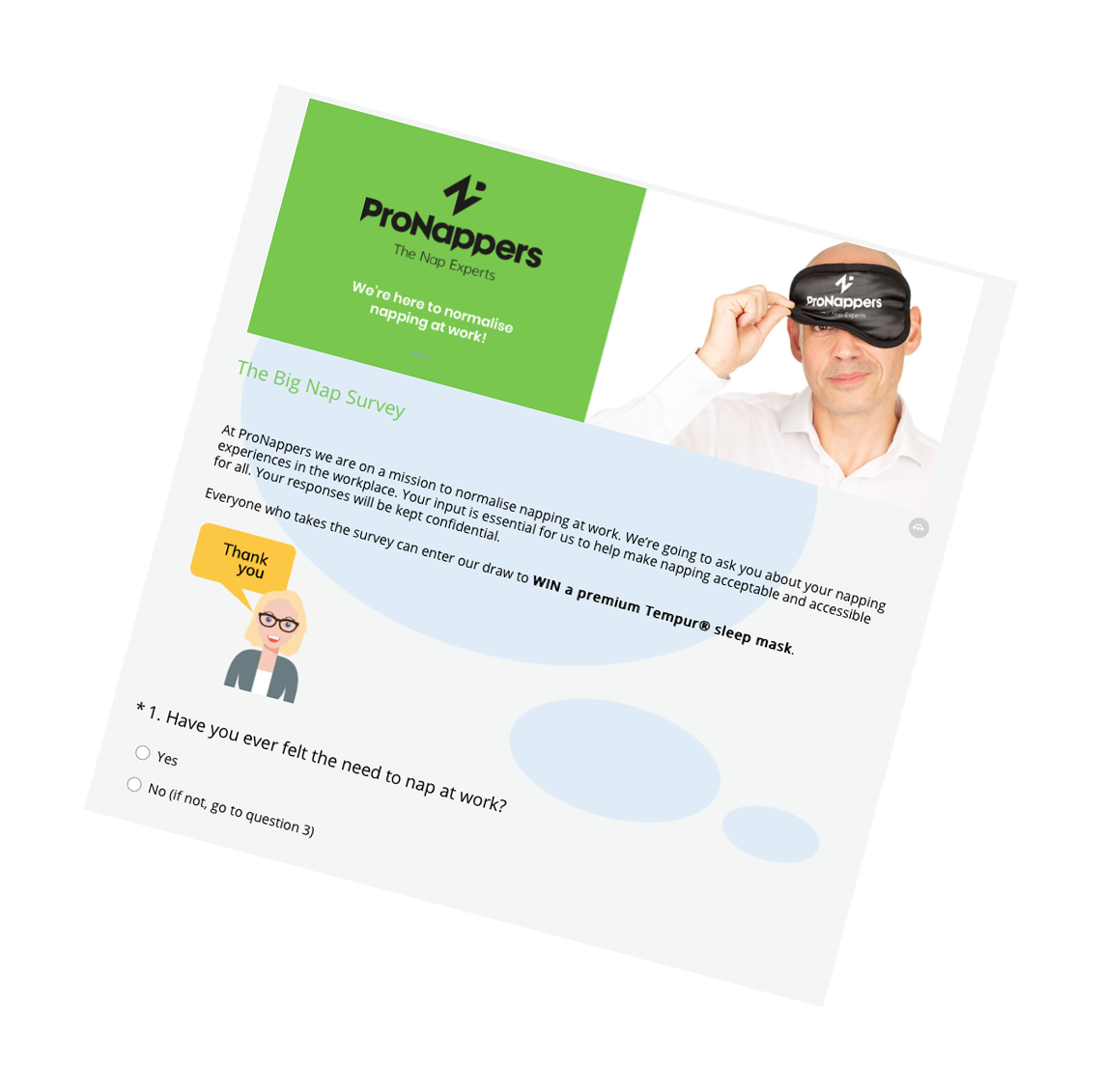 Thank you to everyone who took part in our Big Nap Survey, we had over 500 responses across all ages and industries. Over half the respondents worked for organisations with over 100 employees, so we think we’ve got a good snap shot on attitudes to napping at work across all companies great and small.

Over three quarters of you told us that you have wanted to nap at work.  But, with so few places to nap in existence today, fatigued employees are forced to hide their tiredness and find secret places to get their heads down, with the most popular napping spot being the car (34%).

A staggering 23% of people sneaked off to the loo to get a break but an equal number were forced to doze at, or under, their desks. Other quirky places included your boss’s office, the mother’s nursing room (a bloke!) and some of you have even jumped on the tube or bus at lunchtime to shut your eyes.

84% of you thought it should be acceptable to nap at work and 72% actually wanting a dedicated place to go.  There was a two-thirds consensus that a nap could be good for you.

When asked what stopped you napping at work, 42% said, “I would be too embarrassed,” and 48% said because, “There’s nowhere to go right now.”

Some of the more disturbing insights are that 31% of you said, “It’s not allowed,” and 40% said, “Your manager would think you were slacking.” 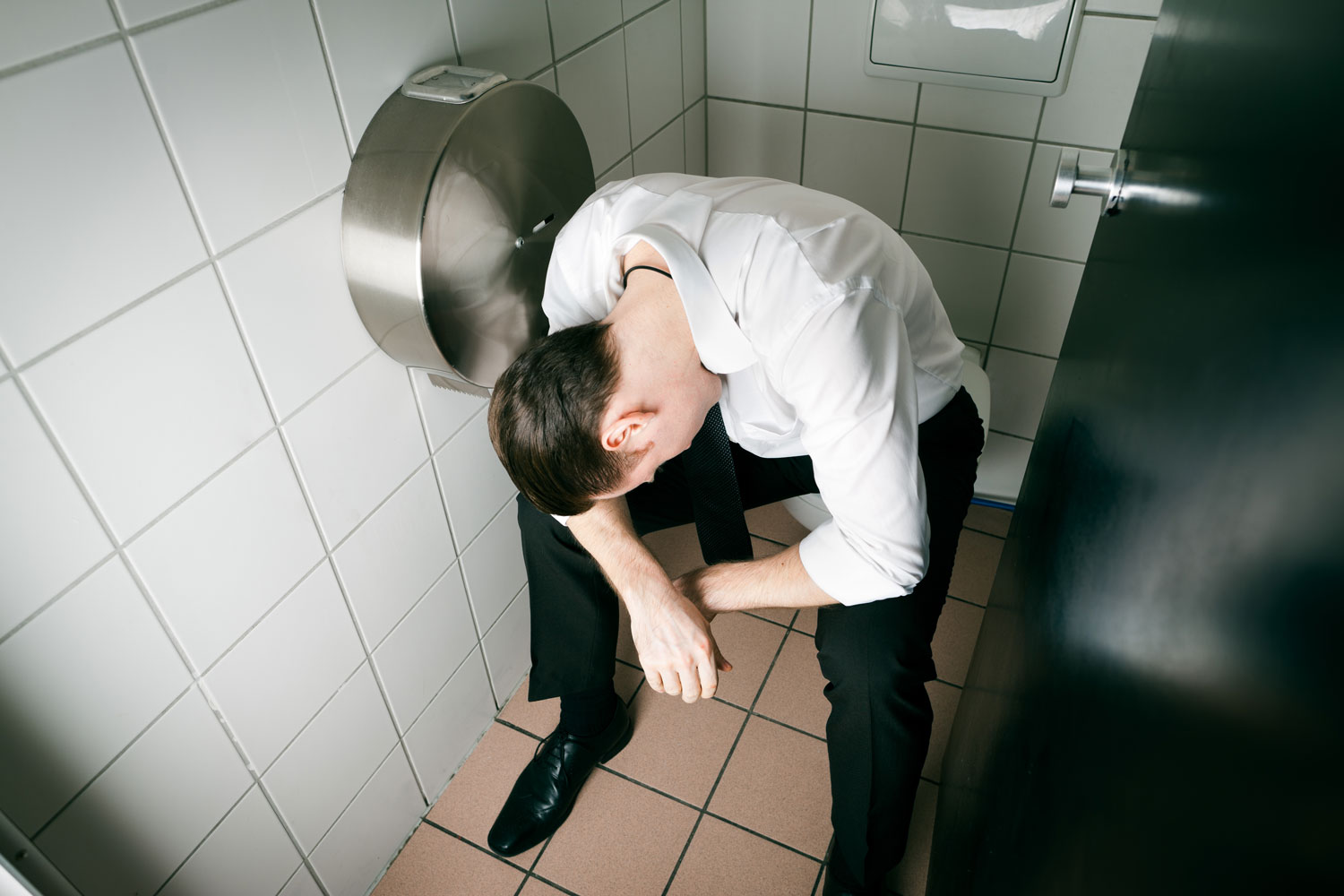 If you napped during the working day, this is where you said that you had gone 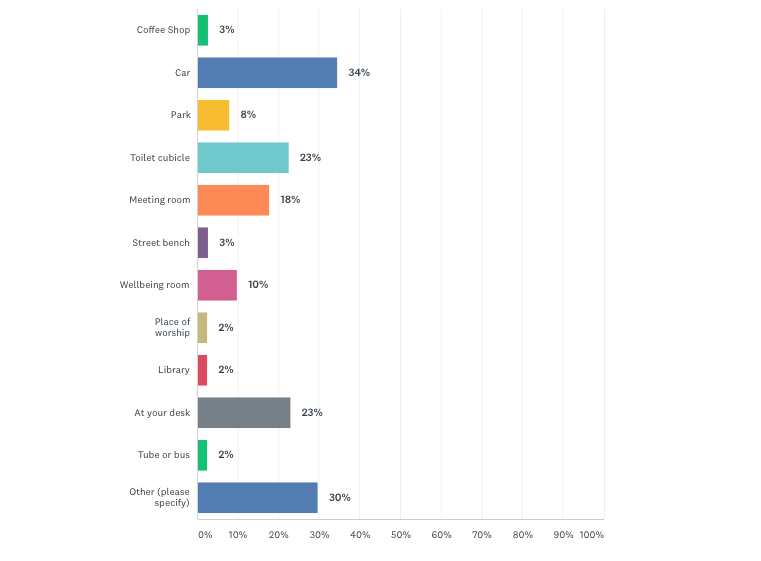 Yet in today’s globalised, hyper-connected, and “always-on” working culture, we are often spending longer hours in the office and taking work home, sometimes to the serious detriment of our sleep. Tiredness can have a severe impact on all areas of your life, and a profound effect on your productivity at work and lead to other damaging physical and emotional side effects.

Our survey told us that many of you only nap on the days you work from home. Our mission at ProNappers will not be complete until you all feel equally happy and able to power up and nap on the days you are in the office and that you have somewhere comfortable and suitable to go.

ProNappers is working to shine a light on the benefits of a 20-minute nap during the day, not only to improve the wellbeing of your teams, but also to boost businesses productivity and ultimately build a happier and healthier work force.

Please get in touch to find out how we can help you.

Share This
We use cookies to ensure that we give you the best experience on our website. If you continue to use this site we will assume that you are happy with it.OkPrivacy policy